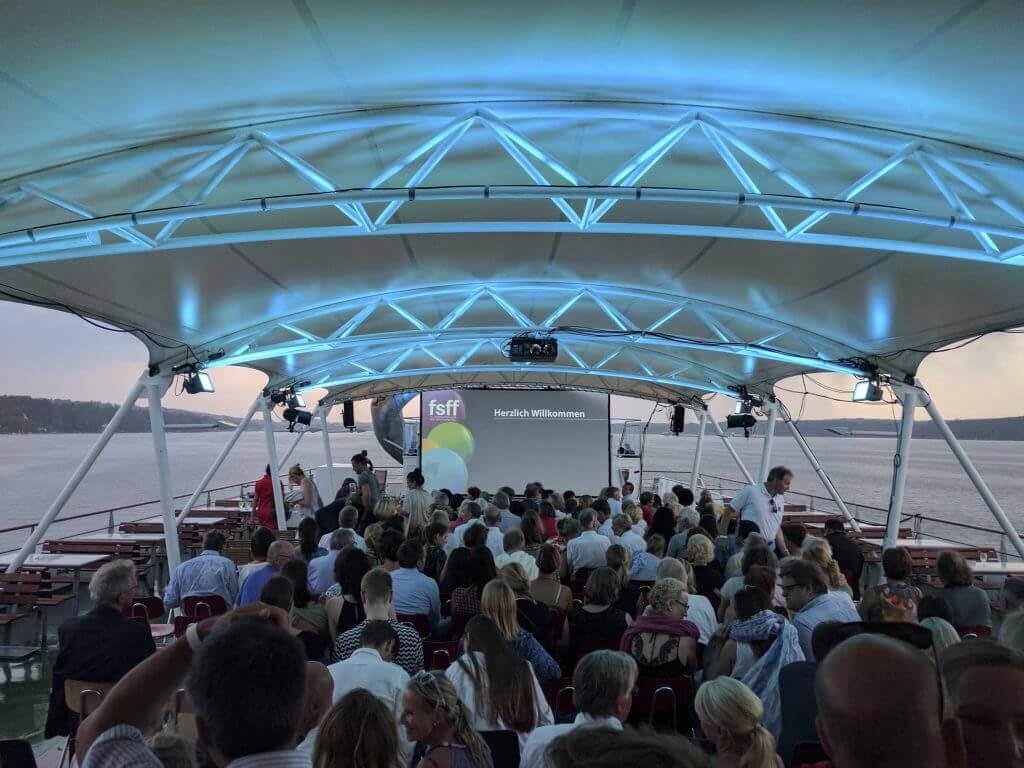 The Fünfseen Filmfestival is currently taking place for the eleventh time. As one of the numerous supporters of what is probably the largest cultural event in the district, we had the opportunity this year to spend an evening on the MS Starnberg.

Even initial raindrops couldn’t change the mood. Finally the steamer offers shelter in the two lower decks. More hard-boiled guests, however, stayed upstairs under the protective pavilion. Mr. Helwig, initiator and founder of the film festival, as well as the captain of the MS Starnberg provided with a short speech for security and reassurance among the present ones. The longer the journey towards Tutzing, Bernried or Seeshaupt lasted, the more dramatic the atmosphere developed away from the screen. The initial grey clouds increasingly merged to form a black mass that discharged its energy on the horizon with bright flashes of lightning. The rain was accompanied by strong gusts of wind. The rest of the guests decided quickly to leave the deck and entered the beautifully illuminated interior of the MS Starnberg.

In spite of the meanwhile noticeable swell, the many lightnings and the crackling rain, the guests as well as the organizers were not deterred by this cultural evening. The event started punctually in the belly of the steamer. First of all, the film “Cambeck” was awarded the Video Art Prize 2017. Afterwards the short films nominated for the Golden Glowworm were shown: “The Hostel”, “Watu Wote”, “Pix” and “The Krampus”. The highlight of the draw was that all of the 450 passengers present were not only guests but also members of the jury. The lucky winner of the prize was “Watu Wote”. If you want to know more about the films, you can visit the website of the film festival.

Despite the storm it was an exciting evening for us – on and off the screen. All in all it was a beautiful and cultural evening with interesting film screenings. At the end we reached the shore without any problems and are already looking forward to next year. However, the tension should take place only on the screen.