“Timekeeping is our DNA” 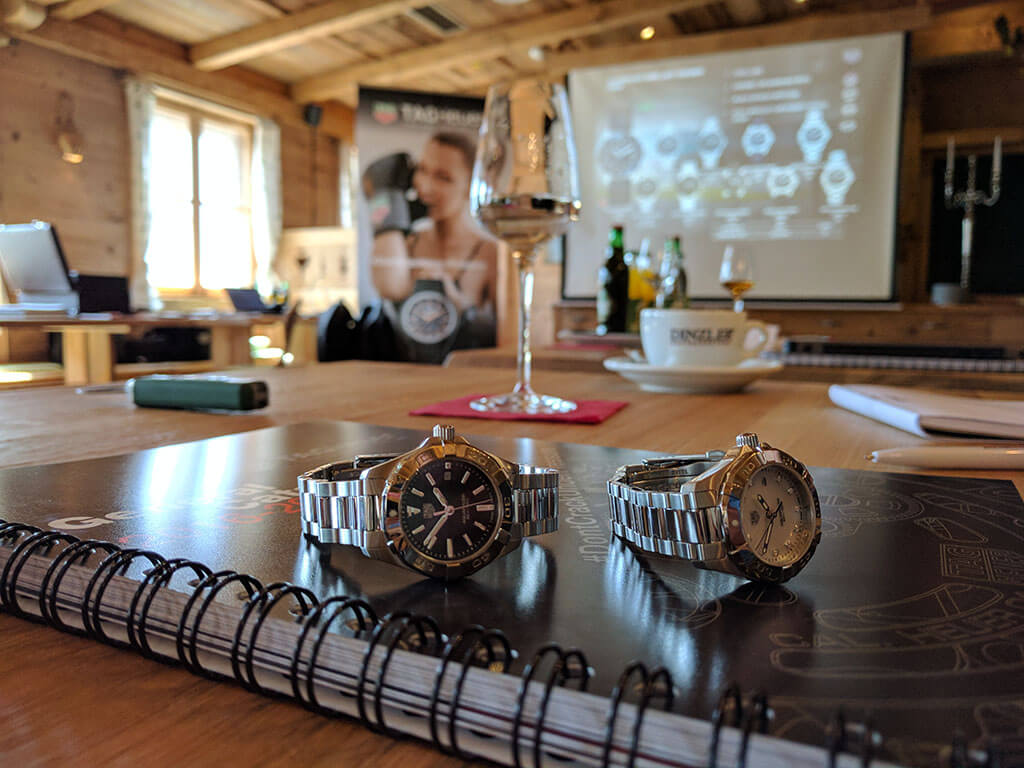 “Timekeeping is our DNA”

At regular intervals, our employees are invited by our watch and jewellery brands to attend further training courses in order to learn more about their current collections. The aim is to improve the shopping experience for our customers and to maintain competent advice at all times.

Most recently, two of our employees were given the opportunity to receive further training on TAG Heuer’s collections. In the following, we would like to give you a brief insight into this further training. We have been invited to the Kartpalast near Bergkirchen in line with TAG Heuer’s company philosophy in the field of motor sports. Arrived in the large halls of the Kartpalast, Mr. Thümmler and Mr. Christandl welcomed us in a seminar room, which was modeled after a rustic hut. With a small refreshment with coffee and fresh pretzels the main topics of the training day were presented. On the agenda were the philosophy and history of the company, the presentation of the individual collections including interesting background knowledge as well as the presentation of this year’s watch models. The highlight at the end of the day was a go-kart race.

From Steve McQueen to Enzo Ferrari

The morning of the training was devoted entirely to the philosophy and history of the company. After all, the watch brand was founded in 1860 and is still one of the best Swiss watch manufacturers today. However, the name TAG Heuer, which is known today, has only existed since 1985 and was created by the takeover of the TAG Group. Previously, only the name Heuer, named after Edouard Heuer, the founder of the company, appeared on the dials. Mr. Christandl was able to tell many remarkable anecdotes about the history of the company. For example, the patenting of the first water-resistant pocket watch case from 1895, the introduction of the famous Carrera Chronograph (1963), named after the infamous Carrera Panamericana race in Mexico, or the current partnership in Formula 1 with the Red Bull Racing Team. The Swiss watch brand has always been closely associated with motorsport in particular. A highlight is the development of the square Monaco chronograph with its original wearer Steve McQueen, which has been part of the watch brand’s range since 1969. From 1971 to 1979, the company was also responsible for timekeeping at Ferrari, which developed from an agreement between Enzo Ferrari and Edouard Heuer. The results of this agreement not only ensured the partnership, but also that TAG Heuer was the first watch brand to sponsor the two Formula 1 pilots at the time.

Motorsport is also part of the company’s philosophy. The Formula 1, Monaco and Carrera collections reflect the company’s many years of passion and partnership with the fascination of motor sports. Dynamic, sporty and elegant. In addition, with the brand ambassadors David Guetta, Bella Hadid, Christiano Ronaldo or Chris Hemsworth, the young lifestyle is in the foreground. Elegance and design, on the other hand, are reflected in the newly launched Link Collection. For people with a passion for water sports, the Swiss watch brand offers the Aquaracer collection and remains true to its sporting approach. However, all watch models have one thing in common: many years of experience in precise time measurement. Mr. Christindl said this in his statement: “Timekeeping is our DNA” and alludes to the precise movements of the individual watch models. In addition to timekeeping for the Ferrari racing team, the watch brand was already responsible for the precision of time at the 1920, 1924 and 1928 Olympic Games.

True to the company’s own DNA and in keeping with the event location, the seminar was followed by a go-kart race track. After a short introduction into the handling of the electric racers, it was time to put on your helmet and take off your visor! A qualifying session determined the starting order of the participants for the following race, which involved a total of 15 laps. The race was enthusiastic for all participants and provided a final framework for the entire training.

We would like to take this opportunity to thank TAG Heuer once again.

We hope you enjoyed this brief insight and that we have aroused your interest in the TAG Heuer brand. We would be delighted to welcome you to a consultation to tell you more about the traditional Swiss watch brand.

Your team from Juwelier Mayer